I am a Warrior

I remember looking at pictures of a friend doing the Warrior Dash last year. I also remember thinking I could never do that. I said I wasn’t strong enough. I didn’t have it in me. I wasn’t a runner.

Fast forward a year later. I’ve been getting healthier. And I’ve been working out consistently. When my kettlebell friends suggested that we sign up for the Warrior Dash earlier this year, I was very nervous. They had to convince me to do it. I still didn’t think I would be able to finish it. However, we kept working out, and getting stronger, and started running more.

Guess what? I am a Warrior! I survived the Warrior Dash today!! This was one of my FinishYear goals, so I am excited to cross it off my list.

They Kettlebell crew before the race

We have an awesome group of people who work out together at 6am most mornings. We are like a family. We push each other, and encourage each other, and love watching each other get skinny strong. There are some amazing success stories from these people in this picture. I was so glad to get to experience my first Warrior Dash with all of them.

My friend Joy and I after the race

If you’re not familiar with the Warrior Dash, it is a 5K run with obstacles like climbing over walls, under barbed wire, swimming through mud, and running over fire (just to name a few.) It was awesome!! 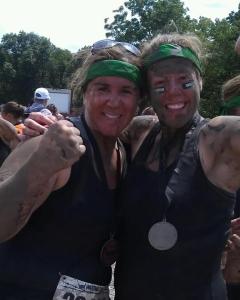 I love this group of people who help push me to do better every time I work out. They motivate me, encourage me, and celebrate with me. I am so thankful for all of them.

Too many times, we tell ourselves that we can’t do something because of fear, or because deep down we know it’s much easier to make an excuse than to do the hard work required. I am very proud to say that I finished the race today. I would not have imagined a year ago that I would be able to do this.

Which leads me to wonder what I will be doing next year at this time that I can’t imagine now. Because I am convinced that once we tap into this hidden potential, unbelievable things can happen.

What is it that you think you can’t do?

Stop saying you can’t, and start working towards making it happen! Let me know what it is in the comments, and I would love to help encourage you.

Filed under #FinishYear, Community, Getting Healthy

Prayers of Blessing for 2012

It was really neat to be able to attend church on New Year’s Day. I don’t recall having done that in a very long time. It was a perfect way to pause after the holidays, reflect on the past year, and focus on the new one.

I look forward to writing more about these words in the months to come. They also compliment my #FinishYear goals as well. Happy New Year!

I am joining with a community of others to finish things this year. This year has been a good start, as I’ve made significant progress on several goals. I was able to do that through the support and encouragement of the communities around me.

My goals are pretty simple this year, as I am learning to simplify my life.  I also anticipate adding some new ones in the months to come.

1. Continue on my healthy eating/exercising plan and drop two more sizes in 2012

As you may have figured out from previous posts, Jon Acuff  has had a big influence on my life this past year. Reading his book, Quitter, and attending his Quitter conference, really impacted me. It somehow flipped a switch in me. Or helped ignite a flame that was dwindling.

It’s so weird when someone’s words and suggestions really resonate with you on a deep level. Especially when you don’t know them. I didn’t have the chance to meet him at the conference. Other than an email or comment or twitter exchange, we’ve never spoken. However, I believe God uses unexpected people to help speak things that you need to hear.

That has been the case with him over the last half of this year. His words and the experience of the conference have prompted me to make changes in my life. Of course, there are many others close to me that have helped encourage me as well. And I am so grateful for the communities of people that I have around me! I know I would not have been as open to this message had I not already been working towards making significant changes in my life through their help.

I recently came across a list that I wrote of my goals for 2011. It kind of shocked me, as I had forgotten that I wrote it. I am not a big New Year’s resolution person. I typically don’t follow through on them and I get frustrated with myself when I don’t.

That’s why in June of this year, I decided to do something different. I decided it was time to make some lifestyle changes. I decided to get healthier. The main goal was to lose weight, but it wasn’t the focus. I wanted to change the way that I approached it. I wanted to take it slow and improve a little bit every day, instead of trying to drop a huge amount of weight upfront and not be able to maintain it. I have done that plenty of times in the past! I wanted to be a healthier me.

What surprised me most when I saw the list was that I had actually made significant progress on almost every item on the list. Wow! I don’t think that has ever happened before. And, remember, I had not been focusing specifically on the list.

So how did I do it? I made a commitment to do it. And, I had communities of people supporting me. When I decided to get healthier, I joined a kettlebell class. The relationships that I’ve formed with people who are getting stronger and healthier (and my incredible trainers) has had a huge impact on my desire to keep going. They support me and encourage me.

After I went to the Quitter conference, I have continued to stay in touch with other people who are also learning to follow their dream. While we don’t speak often, we have continued to support each other in our blog comments and given support through Twitter.

As I have walked through my faith journey over the last few years, I have been surrounded by a community of friends and leaders that have helped me learn to take steps towards becoming the person God wants me to be. This has helped me grow in my faith, and also helped me start figuring out what I think God wants me to do in this life.

These are just a few examples of things that I have done this year. Which is also a very long winded explanation for this post. Once again, Jon has challenged me. This time, it’s to be intentional about 2012.

He’s challenged me to commit to FINISHING my goals.

Not just work on them.

But, to finish them.

So, now I’m going to challenge you. Come along on the ride with me! Figure out what your goals are for 2012, and commit to finishing them.There will be a community of people supporting you and keeping you on track. I am willing to be one of them!

I am currently working on my list right now. Wow, it is tough to decide what the right balance is between pushing yourself and being somewhat realistic given your time constraints. But, I am committed to do it! And, Jon helps with that too.

I am so excited about the possibilites of approaching it from this angle. Last year was about learning to dream again and getting myself to commit to start things again. Now, I am going to work on finishing them!

I’d love to have you join me!